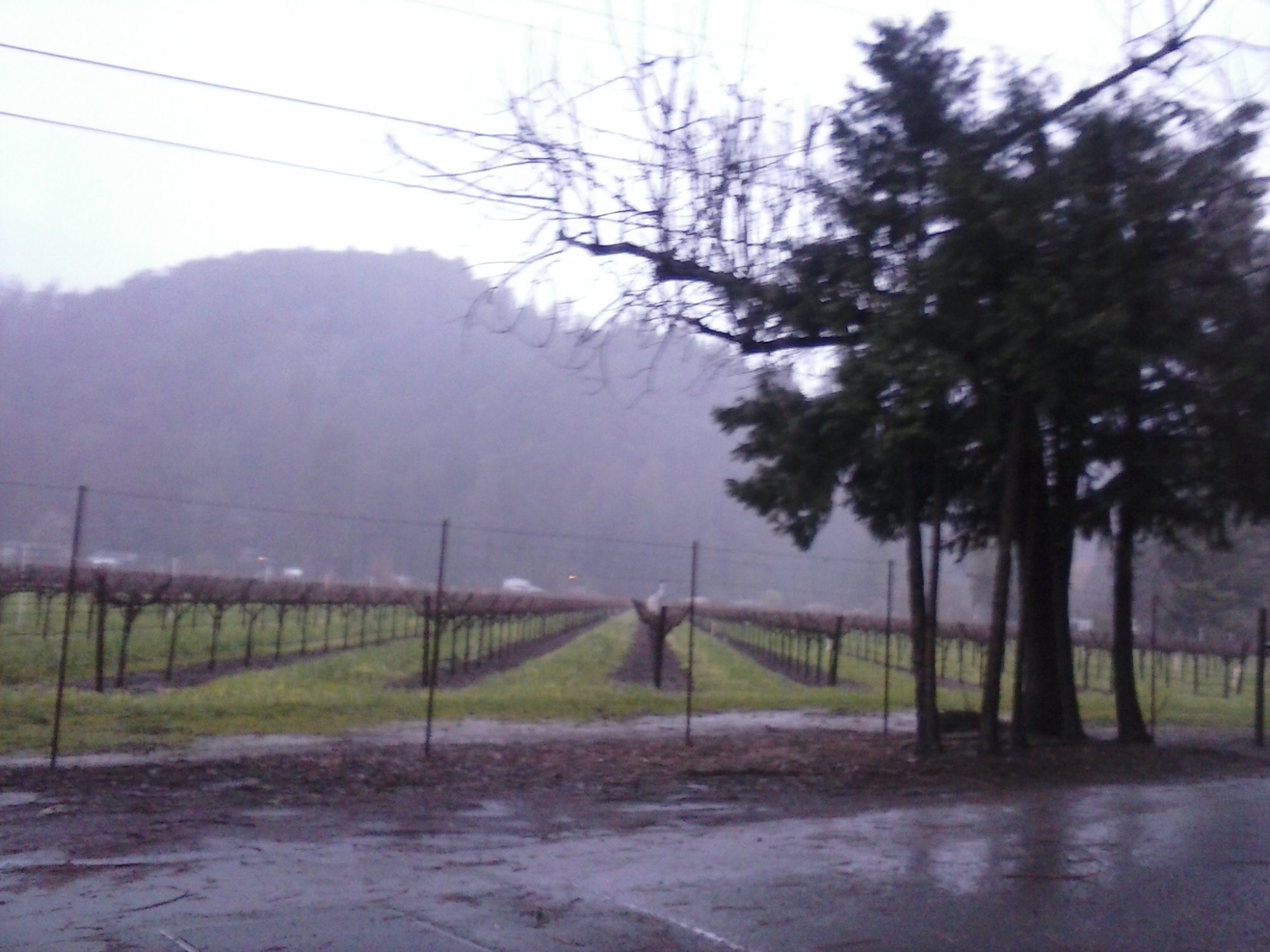 Hello. Thank you for visiting my blog. This is my first post, so please bear with me. I don’t know where all this will lead to; but I already enjoy writing, and taking photos, so I believe this is right up my alley. I must warn you ahead of time, though: I may very well ramble to the extreme, so please forgive me. I believe I do my best writing in such times – perhaps anyone does.

I took this photo the other day. It’s just down the road, in the small town in which I live, in the North Bay Area. This town has really charmed and mystified me: I came here to go to college, and have been here almost a year longer, now, after graduating – for a grand total of 3 1/2 years. It is certainly not my “cup of tea,” culturally; but the natural setting of the place is remarkable. That is what mystifies me. I first came across this vineyard while out driving one night at random – something which I used to do all the time, but which I have for some reason tapered off of doing. (I believe I will pick it up again soon; I can feel it … I have had a shock to my system, emotionally, recently; once I recover from it I will be back to my old contently-lonely self – my mind “free to roam, like the mind of God,” as Jay Gatsby put it). Well, I rolled up on this scene one night, and I was overcome with the magic of it. At night, the lights of the houses across the vineyard that you see, there – glow out over the fog, and hangs amidst the silent rows of little trees. All is damp and quiet and serene. Somewhere overhead an owl glides by, patrolling its empire.
RW Emerson said something along the lines of a poet being the one who is most able to enjoy, and sort of assess, the truest value in a scene and setting. He was talking about farmers’ land: how they may own it, and work it, and reap the earnings from it – but a poet (such as Thoreau) is free to enjoy it, and sort of own it in his soul, more so than anyone else. I don’t call myself a poet, but I do know exactly what he means, and I have never felt that more so than I did that night when I first came across this vineyard. Perhaps it’s similar to the saying, “you don’t know what you’ve got ’til it’s gone” (which I have found out to be very true several times, unfortunately). I swear, I was more content, and felt luckier to be able to enjoy that moment and scene in the way I did that night, than I would be to own one of those houses yet never be able to appreciate it. “What good is it to gain the whole world but forfeit your soul?” So, I hope the people living in those houses do appreciate the beauty and value of their lives there. If they can’t, or don’t, and I were able to help them to do so, I gladly would. Even being such a poor fellow as I am, I am not proud. What an honor it is to share such magic with another human being! And I do believe it lasts forever. Unlike any material wealth – those houses included. So why do people envy, and scheme in order to get ahead? No matter what you are doing in life, it can be fantastical. I guess the saying, “No matter where you go, there you are” is appropriate. And just think of this, too, reader (I am an enormous Jane Eyre fan, so I will address you as “reader” from time to time): you can share in the world of anyone else, if you are a blessing to their world. That is, if you care about them. This is the benefit of caring about everyone as yourself. I honestly have developed, or come across and accepted – take in, like an oft-ignored, to others, wanderer – this way. I care about anyone and everyone in general, as if the world were one great big soul of a person, waiting for you to be its friend.

I am going to cut this post off now, my friends. I am so mentally and physically tired, lately. The post was unedited and a true stream-of-consciousness. I hope it doesn’t sound as much like a feeble attempt at philosophizing as it sometimes felt to be. (At other times, it felt alright). I hope I have garnered a reader or two, and I will talk to you later.

I am an English Literature student, with a BA, gotten in 2016, and am currently working on an MA. I credit, in large part, the great authors and poets of the English Literature pantheon for their genius and their sensibility, which I try, rather, to emulate. I seek simply to share with you, reader, some beautiful moments I have experienced - in this splendid world, and life. That is my "best friend," in my ID pic. No, I am not rich; I just love BMW's. The car cost under $4k used. I love driving - traveling - no matter what car I use. It is the mode of adventure for me, here in Northern California, where I was born and raised. View all posts by athoughtoftoday

One thought on “My Soul over the Vineyard”

This is a text widget. The Text Widget allows you to add text or HTML to your sidebar. You can use a text widget to display text, links, images, HTML, or a combination of these. Edit them in the Widget section of the Customizer.